Federal and international regulations require boats to carry lights between sunset and sunrise and during conditions of restricted visibility. The number and colours of the lights vary with the size of the vessel.

Unique lights are carried by each one. For example, when you are anchored (or tied to a mooring ball), you must display an anchor light that is a white all-around light. It needs to be mounted high so it can be seen from a distance (refer Fig. 1).

However, most of the cruisers do not use a masthead anchor light because the light is too high above the water level and actually makes it difficult to judge the position of the boat from just the anchor light, especially in a pitch-dark anchorage. That is why many people have devised their own forms of anchor lights that they stick lower to the deck on both sides of their boat.

Here is the circuit of a compact yet inexpensive automatic anchor light integrated with an ambient light sensor that turns it on and off automatically. This 12-volt LED light can be used as a traditional masthead anchor light and/or as an optional pretty clever custom-built anchor light. A typical commercial anchor light is shown in Fig. 2. 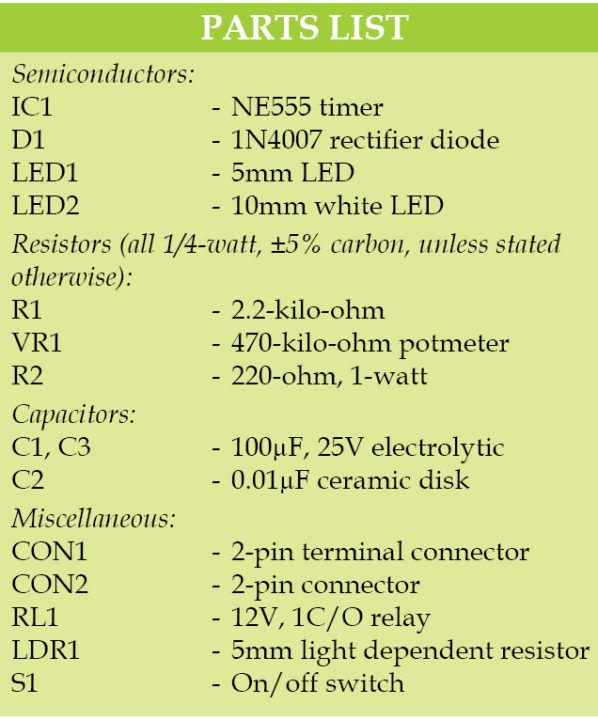 The circuit described here (refer Fig. 3) lets you control an electromagnetic relay so that it turns on a white LED light when the preset light level is reached and turns it off when a different preset level is reached. The circuit is built around NE555 IC (IC1). The 5mm light dependent resistor (LDR1) in the circuit triggers the 12V electromagnetic relay (RL1) as per the ambient light level. RL1 drives the 10mm white LED light source (LED2). Series resistor (R2) is included to limit the white LED current.

Note that switching threshold is determined by a 470k potentiometer (VR1) that causes the output to toggle with the preset threshold values. The light source (LED2) automatically switches on when it gets dark and switches off when there is sufficient ambient light. The 100µF capacitor (C1) provides a bit of hysteresis to prevent the circuit from jittering near the threshold level. The circuit is optimised for use with a nominal DC voltage of 12V drawn from any standard accumulator commonly used in boats.

A single-side PCB pattern for the anchor light circuit is shown in Fig. 4 and its component layout in Fig. 5.

The circuit assembled on the small PCB can fit easily inside most prototype/custom enclosures, which should be waterproof for mounting on the masthead. If possible, try to add some optics (lens and reflector) with the white LED (LED2) to spread the light outward. The 12V power supply input wires can then be connected to corresponding wires extending from the existing electric-points of the anchor light. Fig. 6 shows how the prototype may be assembled. Author’s prototype is shown in Fig. 7.

Reasons to Hire an Expert Designer to Create your Business Website